The Florida Keys offer unique opportunities for bird watchers. Over 200 species of birds are seen in the Keys and about 60 species breed here. Seasonal migrations of raptors (Broadwing, Swainson’s, and Sharp-shinned hawks) and songbirds (Buntings, Orioles, Tanagers, Vireos and Warblers) are often spectacular, especially following squalls or blustery weather. The pelagic birding can be just as spectacular as sightings of Audubon’s Shearwater & Bridled Terns are common to see on our way to the Dry Tortugas.

A dozen species of herons and egrets stalk the mangrove flats of the Keys. The rarest is the comical reddish egret which staggers in pursuit of its fish-fry prey like a drunken sailor. Gulls and terns cavort overhead. On the pilings cormorants hang their feathers out to dry and Belted Kingfishers fly happily in their feeding grounds. If your trip includes the Dry Tortugas you will most likely see Masked Boobies, Brown Boobies and even a chance to see a red footed booby as there has been a recorded sighting each year for the past few years.

The Dry Tortugas lie off the tip of the Florida Keys about 70 miles. In the late 1860’s a massive fort was constructed to guard the sea lanes into the Gulf of Mexico. Although Fort Jefferson was never completed, it still stands guard over the gulf as a sanctuary for birds. Within its massive walls lies an oasis that draws thousands of migrating birds, exhausted from their long trip across the Gulf of Mexico. The sandy islands around Fort Jefferson are pristine and provide excellent breeding grounds for many sea birds. The designation as a National Park further protects the Dry Tortugas area and maintains the beauty of its beaches and coral reefs. Magnificent Frigatebirds, whose feathers weigh more than their skeletons, float effortlessly over Ft. Jefferson at the Dry Tortugas National Park. The only nesting colony in North America for Magnificent Frigatebirds is in the Dry Tortugas where you may see courtship, nesting and displays. Another rare but regular bird during the spring migration is the  Black Noddy where up to 7 individuals have been spotted.  Several species of West Indian birds breed in the Florida Keys such as the Mangrove Cuckoo, Antillian nighthawk, Black-whiskered vireo, Yellow warbler, Grey Kingbird, White-crowned pigeon, and can be easily viewed if you know where to look. On our way back to Key West we will check the towers and navigation buoys as the Roseate tern is commonly found on these locations. We hope you consider birding in the Florida Keys and call on us for the perfect birding charter. Happy birding! 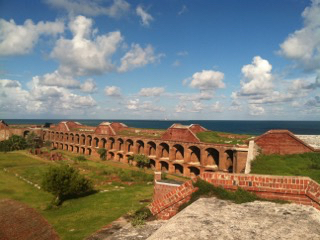 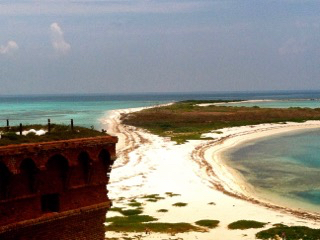 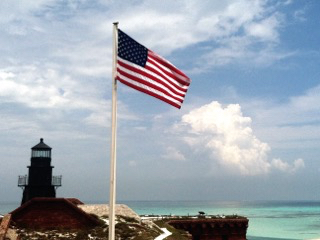